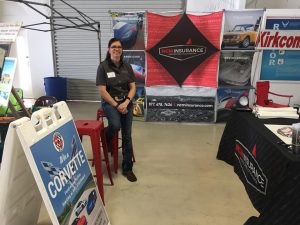 Sharon hanging out in Lakeland, FL for the NCRS Winter Regional's

Over the next year we will be posting more blogs and updates on a more consistent basis. We have, honestly, been a bit busy here in the office.  Since we are a small office of four agents, we want to give you a little more insight to who we are individually with our Agent Spotlight.

Our first spotlight is Sharon Smith.  I have known Sharon and her husband for several years through Church where she and Chris were teaching Sunday School.  We were fortunate to have them teach my daughter, Gracelyn.  I didn’t realize at the time that they were into the car hobby, and once I found out I was excited!  Eventually, they purchased insurance from us for their Corvette and a Datsun they once owned.  One Saturday I saw Chris at the local Cars & Coffee, I mentioned to him that we were looking for a Customer Service Rep.  It must have been the right time for them, and soon after Sharon submitted her resume.  After she interviewed for the job we knew she was the person we were looking for. 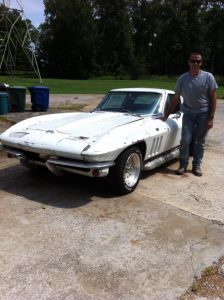 This is the 1965 Corvette when Chris and Sharon first bought it.

Sharon has been with us since July of 2016, and has been awesome to have in the office.  She keeps us in check with making sure that we are consistent in our process, and really enjoys connecting with our customers.  Sharon transitioned from a Customer Service Rep to an Agent in June of 2017.  Sharon is a native of Bowling Green and has lived here most of her life. One thing you may find interesting is Sharon was a Professional Bowler!  She still bowls in a league and competes in a few tournaments each year. Sharon has worked in customer service for about 20 years, primarily in the medical and banking fields. She and her husband, Chris, have been car enthusiasts for many years, owning a 1965 Corvette for four years and have completed a major restoration on it, AND they just bought a 2006 Convertible Corvette.  We asked Sharon to fill us in on their adventures with their Corvettes. 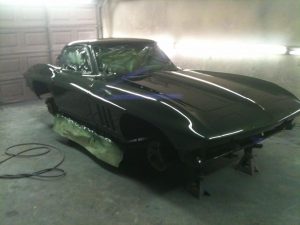 “Chris and I bought our 65 Corvette in the summer of 2012 from Chris’s ex-stepfather, Jeff.  Jeff purchased the car from his sister and brother-in-law in 1982, and drove the car regularly throughout the 80’s and 90’s until he parked it.  He was planning to restore the car, but we all know that priorities get in the way.  Naturally, Jeff decided to sell the car.  Jeff and his sister had an agreement that if he were to ever sell the car, that she would get first dibs.  For some reason, she didn’t want the car, so he asked other family members if they wanted to buy it.  Chris fell in love with the car at age 12.  Although he had only driven it one time, he had so many wonderful memories of riding in it to the National Corvette Homecoming at Beech Bend, the ball field, or even just to the store. 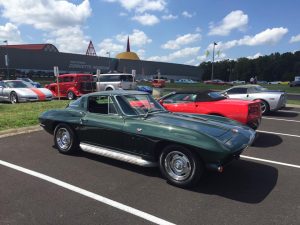 Jeff offered to sell it to us and I told him yes even before asking Chris if he wanted it.  I knew how much he loved the car and I knew he would always regret it if we didn’t buy it.  The car had been sitting under a tree for over 10 years so it was in rough shape.  With the help of a friend that owned a body shop and his current stepfather, we got it running again!  We have repaired the body and interior so far.  We put a crate motor in it last year and really enjoy taking it for a drive on nice days, going to our local cruise-ins, and events at the museum. 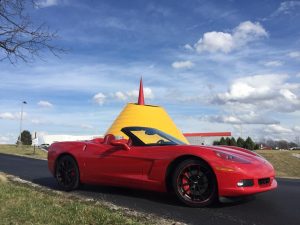 The Friday of New Year’s weekend Chris was off work and planned to pick me up for lunch.  When I went outside to meet him, there he was with a 2006 Corvette convertible.  He had seen the car on our local Chevrolet dealer’s website and decided to go look at it.  A friend of his worked there and told him to take the car to see what I thought about it. I was not excited to see it and not interested in buying another Corvette.  We went to lunch and he began to explain that he wanted a Corvette that we could drive more often than the 65, that I could drive to work (occasionally), and the cruise-ins.  He had been talking about maybe getting a C4 for little money, not a C6!  I warmed up to the idea after going for a ride and it was beautiful.  It is Victory Red with black top, red interior, and less than 25000 miles.

Corvettes have been a passion for Chris and I for many years and since coming to work at the NCM Insurance Agency, they have a special place in my heart.  We are now fortunate to be a two Corvette family!